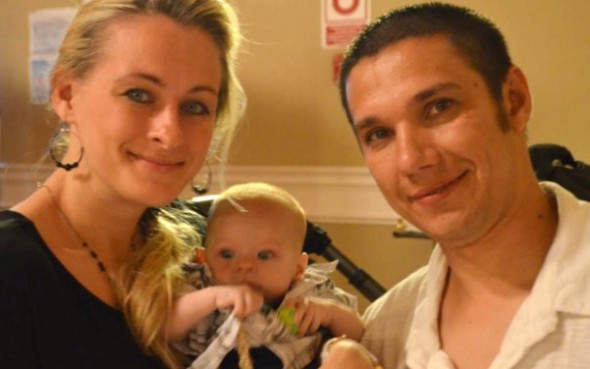 First of all, let me just admit that I get the majority of my news from Mama Pop. It’s an online independent entertainment site that was started by two stay-at-home moms. I can totally dig that. Let me also make it clear that I do not want this blog to turn into a Mama Pop spinoff. I try to keep the news out of it, because we see enough of it as it is, and frankly, I’d rather talk about my garden and baking.

But when I read this article, I was brought to tears  and have not been able to stop thinking about it. After I read it, I immediately picked up my baby from her crib and gave her the biggest hug I could.

So here’s how it went down: This five-month old baby, Sammy, was born with a heart murmur. The parents were treating the murmur at Sutter, but went to the Hospital immediately when the baby got flu symptoms a couple weeks ago. After they were unhappy with the treatment at Sutter (wrong antibiotics, possible heart surgery, and so on), they sought out a second opinion at Kaiser without getting a “proper discharge” from Sutter.

The Doctor who treated the baby at Kaiser said that the baby was perfectly fine and was discharged to go home with his parents. While at the hospital, the parents were questioned by the police and CPS and were given the A-OK to go home. The next day, they got a surprise visit from the police and their baby was taken – yes, taken from their hands – for neglect.

Since then, the mother has been able to visit her baby once, and the visit only lasted for an hour. The couple were unable to get their baby back and CPS was looking for a family to take the baby.

I dug a little deeper and found an article about this on the News 10 website. There was an update today that a judge will hear the case and is supposed to make a judgement today.

That’s pretty much all the information I got on this. I don’t know the whole story, but as a mother, I have a million thoughts of what I would do if I were put in this situation. We all say we would severely hurt or murder someone if they tried to take our baby. But what if the person trying to take your baby was actually the authority? Would you risk going to prison? I wouldn’t, I couldn’t. Our babies need us to be there for them, and there’s not a hell of a lot we can do for them in prison. So, I would end up doing what this couple is doing. And wait.

If you watch the video in the Mama Pop article, the medical report from Kaiser shows that CPS and the police were informed that Sammy was safe to go home with his parents. So, why did they go back the next day? What neglect was there? Why are they so worried about this couple and not the drug-addicted parents who put their children in harms way every day? Is there more to this story that we don’t know? Maybe.

I guess Sutter was a little confused when they told us that they were a “baby-friendly” hospital when we had our little girl. They don’t allow pacifiers in the hospital, but they allow this? Something ain’t right.