Learn to cook something from scratch

If you read my previous post about making pesto, you know that my pasta is my specialty. Unfortunately, aside from veggie stir fry, it’s pretty much the only thing I know how to make for dinner.

Since I recently accepted a new position as Housewife, I have decided that I might want to add a few more items to my repertoire. So, as I was eating Kraft Mac n Cheese one day, it came to me. I love baked macaroni and cheese. And I wanted to know how to make it on my own.

Seeing that my boyfriend doesn’t like the healthy version of, well, anything, I pulled out a “Joy of Cooking” cookbook my mom gave me years ago, when she had hopes of me leading a more domestic lifestyle.

After we did our grocery shopping and I got all the ingredients out, it was 8 pm. Since we normally go to bed between 9-9:30 pm, to say this would be a late dinner would be an understatement.

Like I said before, I’m used to pasta. Using one big pot and boiling pasta. Not exactly used to using a pot and pan at the same time. And the onions were supposed to be minced, but due to my time restraint and the fact that I didn’t start chopping them until WAY later than I was supposed to, the pieces were just a little (ok, very) big. After spilling the flour on floor, spreading cheddar cheese all over the counter and floor and almost melting my wooden spoon, I was finally able to get my act together. 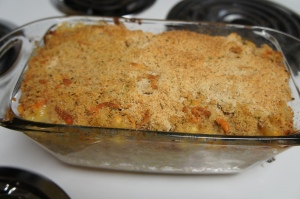 With the dish FINALLY in the oven at 8:30, we would be eating around 9 pm. I cleaned up my mess and got in some TV before it was taste test time. If it came out inedible, I would be screwed. Luckily, I’m dating a garbage disposal who will literally eat almost everything.

We dished up our food, and when he took his first bite, he had a surprised look. “It’s actually pretty good.” I tried it and also thought I did a pretty danged good job. When I asked for his honest opinion, he gave me 4 out of 5 stars. Given my experience with cooking, that was awesome! 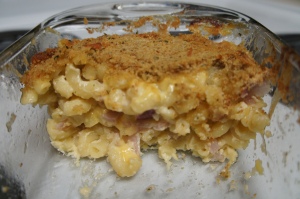 We ultimately decided that it could be the fact that he was about 5 minutes away from going comatose due to lack of food that made it taste so good, but he liked it. Either way, it served us dinner and him lunch and dinner for the next day.

I’ve always been scared to cook, but as it turns out, when you actually follow a recipe, it’s pretty easy. Definitely giving myself more prep time in the future, though!